There was a lot of  tech “stuff” going on in my cat deterrent video “How to Stop Cats Forever”,  which is only skimmed over in places  -I didn’t want the video to drag out for too long  plus it was meant to be more of a parody, fun instructional video.

However i do get a lot of questions about various tech aspects of how the set up worked. So if you are a little more tech minded and craving a little more detail, I have prepared this post for you!

However I may still skim over some  stuff…but with extra pictures! Everyone loves pictures? – A complete written instruction set is still to come (for the Water Spray version)

Each time the “Extreme party popper” was activated it took about an hour to clean up and reset it. The flour was the biggest pain but it looked awesome, so I had to go with it. Overall I only had about 3 false activations which is pretty good considering IR motion sensors are pretty “trigger happy” in a garden setting.

The streamers had to be individually rolled as They are too big straight from the packet.

When rain was expected each of the pipes had to be covered in cling wrap with a rubber band – because flour + water = blergggg.

Also what I found interesting if one of the pipes wasn’t packed as tightly as the others, when it would fire It would actually inhale the streamers, I guess due to the slight Venturi effect in the sections of pipe at 90 degrees.

A lot of people  have commented “Weren’t you worried that someone would steal the cameras”.  It’s not seen in the video but the actual setup had all of the cameras inside looking out through a glass sliding door.  If anything it was mainly just to protect them from the weather.

I didn’t actually have the right plug connector for the shutter release to plug into the Canon DSLRs on hand.  So I managed to work out which two pins where the actual shutter and basically just slipped the wire over the individual pins – Perhaps you  shouldn’t try this at home 🙂 I had to carefully work out the exact Focus Point and exposure for both cameras. This was set up for a night exposure which is why the dove images are a bit over exposed.

The air tank which was pretty much made from scratch (as seen in the video) I figured just to be safe should be pressure tested (Probably overkill though).

I used a method that is common in industry for such things which is done by filling the vessel with water and then applying pressure to about 150% of the pressure you plan to operate it at normally.

This is called a hydrostatic pressure test.  It’s handy as if it does fail it’s not as Catastrophic as if it is full of air.

The first tests with flour and only a couple of streamers worked a treat. Without a roof overhead they actually go really high! Higher than what I wanted in the home camera set up as they would have just disappeared from shot.

I was always a bit disappointing with the lighting in my original “How to stop cats pissing on your car” video, so I went all out on this one. The more light the better for a using a high shutter speed! Also a light behind the cats as a “rim light” to laminate the flour.

Now this wasn’t covered in the video but I actually used a separate timing relay kit for the DSLR cameras.  This was to allow them to keep taking additional photos after the water spray had stopped, this to capture the glorious aftermath.

Also visible in the above image is the separate relays for the popper’s reticulation solenoid,  the240 volt AC lighting trigger and the actual hose spray.

Although in the video I showed that I used a bore water pump relay , I ended up supplementing this with a new, solid state one from the shops. Partly because I still needed my sprinklers to work, but also because the solid state relay has no moving parts and is that  little bit quicker to trigger the lights for that all important first photo.

I found that unfortunately the fleeting half second that the lights took to glow to their full brightness, was too long and the first photo taken would often be underexposed. 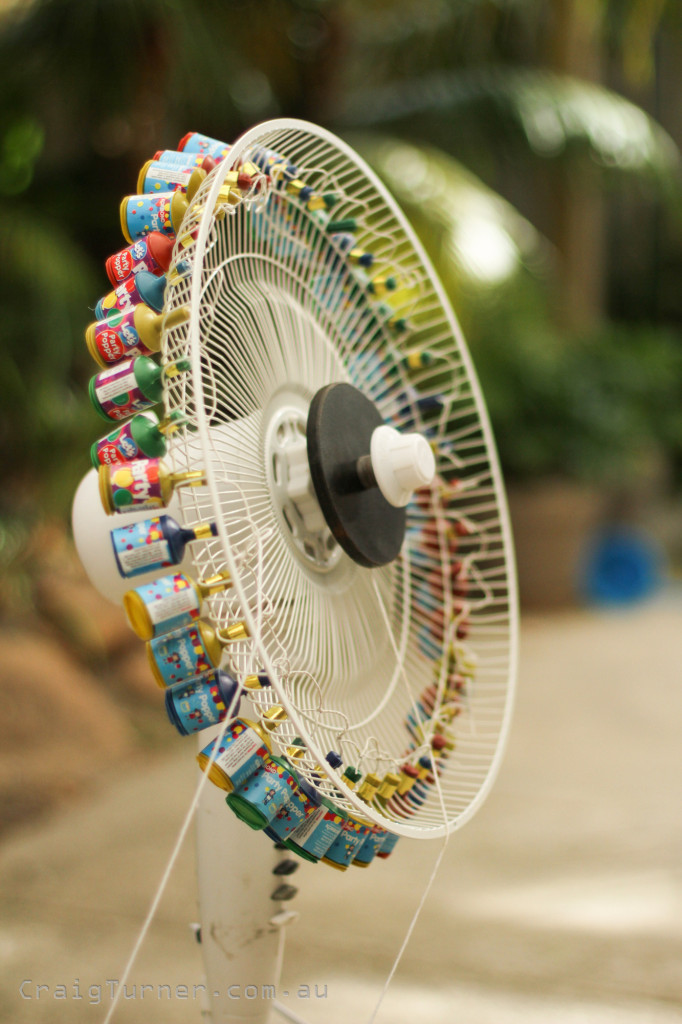 The strings on party poppers were pretty crappy in the end and and seemed to fail a lot as seen in the video.

I may have been able to persevered and combined this with the final setup however I realised it probably isn’t a good idea to have an ignition source (the party poppers),  firing next to a huge flammable dust cloud of flour. It could have been a pretty big Fireball, yeah it would have been a funny fireball,  but  still a fireball- Right next to my house.

When my 3 year old son decided he would start a habit of standing really close to the TV and hitting the screen when watching it,  I found that I could use part of the cat spray setup… minus the “spray” part.

Utilising the motion sensor connected to a small 12 volt air compressor, This would make a noise for a couple of seconds when he was too close, it seemed worked a treat.

Yeah I could have tried “parenting” or “discipline” or whatever New age witchcraft is in fashion at the moment,  but I don’t really care for doing things that don’t involve wires and electricity and stuff. 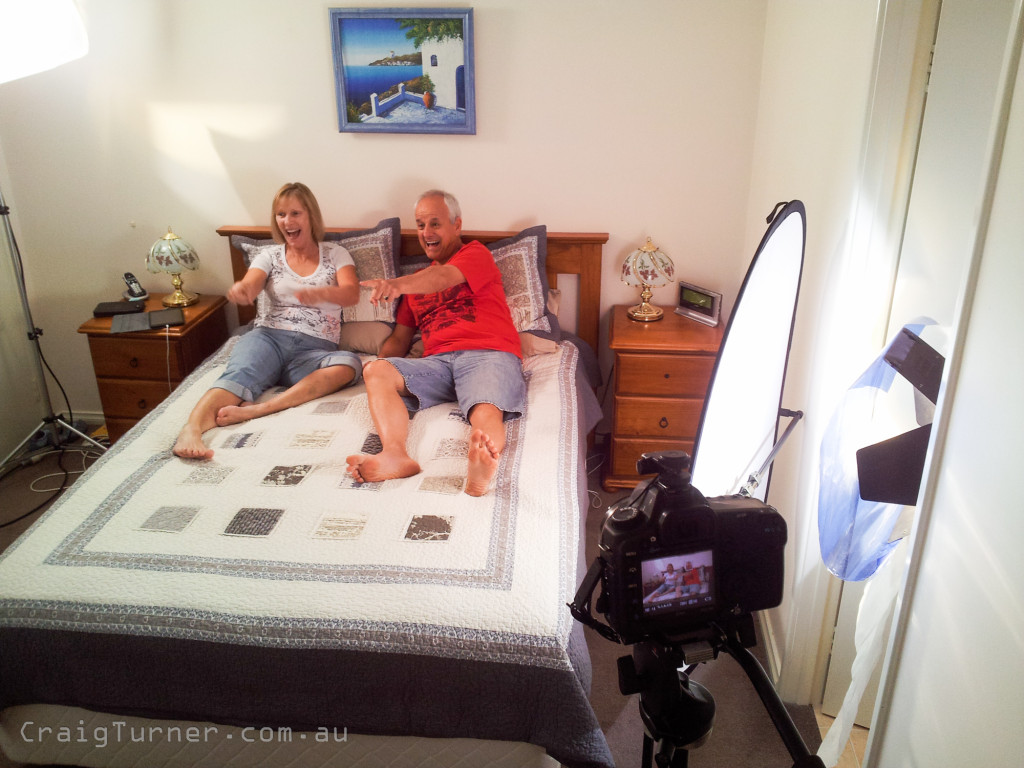 Kristen’s parent’s being a good sport helping with filming one of the “cut-away” scenes. 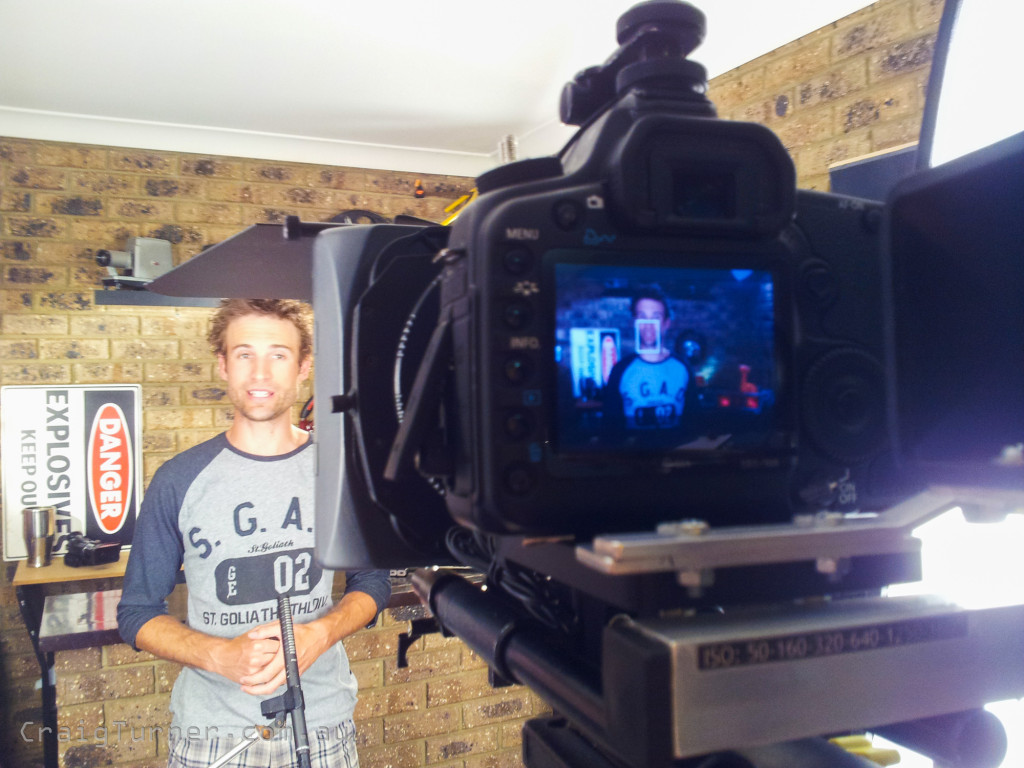 So that is it for now. I will probably add to this post in the future as I stumble on more photos, but I hope this gives some interesting insight for now.

If you do have any questions about the setup feel free to leave a comment below!